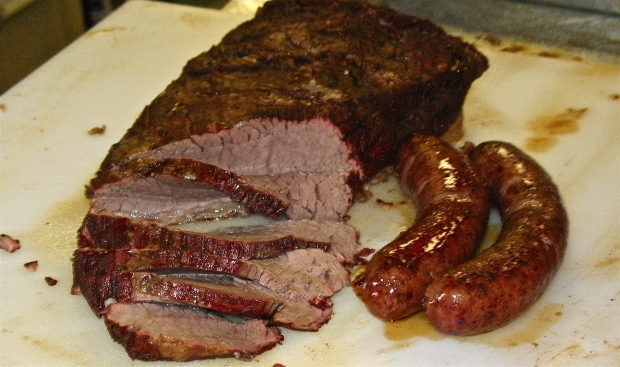 See, this is when I'm not sure I want to be known as a food critic. First of all, I'm not. I write a restaurant blog about Waco restaurants and sometimes rave about restaurants from other towns that strike my interest for one reason or another.

If you follow this blog closely, you may have noticed that I never really give a thumbs up or thumbs down. Perhaps I should. Perhaps I just don't have the gumption to do it. But I would rather provide info and maybe a little perspective rather than say "go here" and "don't go there." Of course I'm going to say  go to places like Kitok's, Bangkok Royal, Vitek's, Cafe Homestead, etc. But there are several good reasons for that and it doesn't take a food critic to taste that those places deserve your attention.

That's a lot of set up to write that I have mixed feelings about the Texas Monthly barbecue list.

I'll tell you what I don't like about it first. Obviously I'm bothered by the fact that there are no Waco restaurants on it. I'm not going to rip TM barbecue editor Daniel Vaughn or write him a strongly worded tweet or email because I've seen from his work that he has good reasons for the barbecue choices he makes. However, there's one restaurant in the  Top 4 of the TM list — Snow's in Lexington — that I've dined at and wouldn't put in the top 4 in Waco. Seriously, I think this place gets by on old hype.

Secondly, the list is Austin-centric to a fault. Granted, the barbecue in that great city is amazing. I'm not going to argue that it boasts the best barbecue in the world. I love Austin and go there as often as I can find an excuse and I find plenty of excuses. But there are 20 restaurants on the list within 80 miles of Austin. In a state of 268,581 square miles, that's a pretty high concentration of the supposed top 50 in the state.

I can see how it would be possible for me to evaluate 300 barbecue restaurants across the state and come up with a very similar list of the 50 best. I might even have more in the Austin area. But until I do that, it's too easy to assume that TM's group of "trained eaters" were a little lazy in their sampling of Texas barbecue.

Anyway, those are minor complaints. This type of list is going to generate conversation and it already has judging from the Twitter chatter.

Here's what I do like about the list: it's a challenge. I've only dined at a few BBQ joints on the list. So I have work to do. Check out the list for yourself, it's here.

One more bite: OK, I'll tell you why Snow's wouldn't be in the top 4 in Waco. I've been to Snow's and it wasn't worth the drive. My time would have been better spent at Vitek's, Tony Demaria's, Rusty Star, Mama & Papa B's, Jasper's and possibly Michna's.