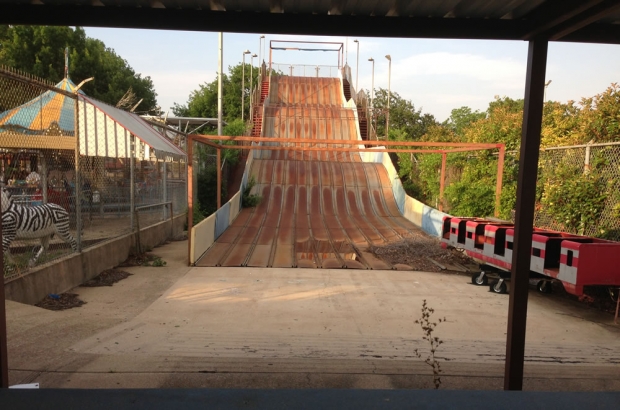 Before I jump into the list, I want to point out that the accompanying picture in this post is of the slide at Lion's Park in its current state. I mentioned in the last post that someone should start a "Save the Lion's Park Slide" foundation. Maybe this picture will help get that going.

Without further adieu, here are 20 more reasons you know you grew up in Waco in the 80's and 90's.

1. When Rappin' Reggie said "Get busy, not dizzy! Word!" you knew he meant it.

"My name is Rappin' Reggie with tv 44 telling you to get busy and so much more..." That's all I remember. Well, that and "Get busy, not dizzy! Word!"

2. You remember calling Grandma Jolly, but you don't quite remember the phone number.

3. You remember going through the secret doors at Poppa Rollo's and watching The Three Stooges on the big screens.

Good news! Poppa Rollo's is still there, and you can still go through the secret doors. The bank vault with the fake brick wall is my favorite, but the fake phone booth was pretty cool too.

4. You were a hockey fan for about a week when we had the Waco Wizards.

True story, my wife met my brother for the first time at a Waco Wizards game. She and I were in high school and dating at the time, and we went there with a group of friends. My brother was home from college, and he came to the game with us. I don't remember the outcome of the game, but I'm pretty sure there was a fight on the ice.

5. You remember when there were 2 skating rinks in Waco: Skate Place and Skate World.

I'm pretty sure it mattered which one you went to, but at the time I didn't really care. I just went whenever I was invited to a birthday party at one or the other. I'm also pretty sure my friend, Julie Walker, was a competitive figure skater when we were kids, but it's been so long that it's possible that I'm wrong about that. Maybe she'll read this and confirm or deny it.

6. You went to TJ Cinnamon's after going to the movies at the Plitt 6 while you waited on your mom to come pick you up.

The theater is still there as a discount theather, but TJ Cinnamon's is long gone. Kids these days don't know the joy of a good cinnamon roll after a movie.

7. You remember calling a phone number to find out the weather forecast and current time.

8. Any trip to Richland Mall included a stop at the Just For Fun arcade.

If I didn't have any quarters, I would go around to all the games and stick my fingers in the coin returns to see if there were any quarters there. That worked maybe once out of 100 tries, but that one time was enough to give me hope each time I tried it.

9. You remember renting movies and video games at Blockbuster and Hollywood Video (and Flicks Video before that) before RedBox and Netflix put them both out of business.

Something about Blockbuster seemed so much cooler than the local video stores. Getting a Blockbuster was kind of like getting an Olive Garden. It meant that Waco had finally arrived.

10. You also remember eating at Grandy's right next door to Blockbuster.

I saw a Grandy's a couple of weeks ago driving through Arlington, so I know they still exist, but gone are the days when you could get fast food chicken fried steak with mashed potatoes before going to rent some movies.

11. You remember going with your parents to the Regal car wash on Valley Mills

My favorite part was climbing up the steps to the little platform for kids to be able to watch the cars go through the car wash.

13. You remember cracking confetti eggs on your friends' heads at the Brazos River Festival.

I only went to the Brazos River Festival a couple of times. My friend, Holly Funderburk, won a goldfish at one of the booths when we were in 5th grade, and I helped her name it. I think she named it Hermie. Anyway, that fish lived for years and years. It might even still be alive, for all I know.

14. You either cruised the Valley, or you knew people who did.

I was never really into cruising the Valley. I do remember driving down Valley Mills one Friday night with my parents in our 1989 Pontiac Grand Prix during what appeared to be some sort of hot rod show. People were lined up all along the street to watch the hot rods, and I remember seeing kids booing our car because it wasn't a hot rod. That's my only Valley Mills story even remotely related to cruising the Valley. Maybe you have some stories to share below in the comments.

15. You remember having your choice of 2 music stores and 2 bookstores at Richland Mall

You could go to Musicland or Hastings to get the latest Van Halen cassette single, or go to Waldenbooks or the other one (I don't remember the name) to buy books.

16. Your family got all of its pictures taken at Olan Mills.

I still remember getting all decked out in my acid washed cargo jeans and royal blue and navy striped rugby shirt to get my picture taken with my 2 older brothers. I don't remember the shoes, but it could have quite possibly been my Reebok Pumps, because that's how I rolled.

17. You drove out to the Pledgers' house to see their Christmas lights every year.

Back before there were multiple Christmas light displays around town, there was the Pledgers' house. It was a Christmas tradition for many families to drive by and see their light display.

18. You also drove out to McGregor to see the Gilmore & Davis windows at Christmas time.

The Gilmore & Davis furniture store in McGregor put out Christmas displays in their store windows every year at Christmas. A new display was added each year making it bigger and better every year.

19. You remember having to tell people in other parts of the country that you were not part of the Branch Davidians.

20. You were excited to go to the NBA exhibition games at the Ferrell Center

One year, I was in the right place at the right time, and some grown-up gave me their pass to the VIP area where you could go meet players and get autographs. So, yeah, be jealous.

The truth is, I could probably think of 100 more things just like this and still not cover all of the memories that people have from growing up in Waco in the 80's and 90's. All of these little things contribute to the richness of the nostalgia of our childhood, and I for one am thankful that I got to spend my childhood in good old Wacotown.