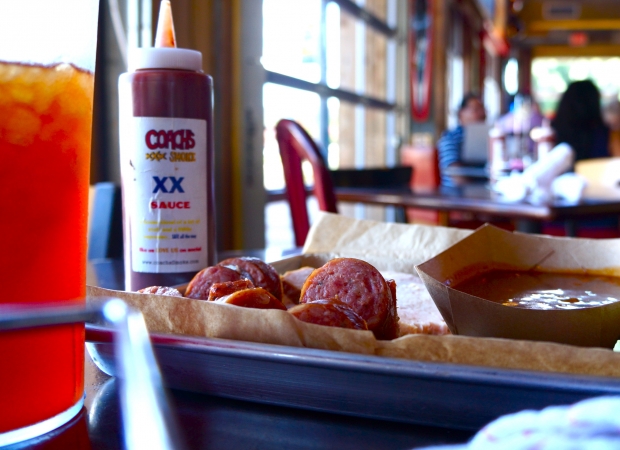 Hello, friends, my name is Chad. I know it's been a while since we spoke, so I just thought we should get reacquainted.

As much as I've tried, I've been unable to add extra days to the week, a failure which has resulted in a bit of drought on this blog since around Memorial Day. Rest assured, though, I'm ready to get into full summer blogging mode. Prepare to have your Waco-restaurant curiosity edified two to three times a week!

As I'm back on the blogging track, I stopped in for lunch at Coach's today. It's been open for about two weeks now, but other business has kept me from mentioning it here. First things first, it's great to have a sit-down barbecue place downtown. It's not Lambert's of Austin, but it's a quality addition to our downtown scene.

Coach's, as you might be aware, is an extension of a restaurant group that originally opened in McGregor about three years ago. The McGregor location is a traditional pit bbq joint where you enter through the pit room, order, pay and find a seat. But Coach's downtown is a slightly more formal dining experience as it's table service.

Local photographer extraordinaire Chelsea Santos dined with me at lunch and she pointed out how nice it is to have shaded outdoor seating. You're probably familiar with the space as it was previously occupied by Sam's on the Square and Square Bar. It'll be a good place to have an evening outside beer.

I found a couple of menu items that remained consistent with the quality of the McGregor location. I'm unashamedly a fan of sides and the kickin' beans and white potato salad were excellent.

I hesitate to comment too much on the meat as my order was limited. That point — i.e. the condition of the brisket, etc., — is going to have to be hashed out by people with stronger BBQ opinions than mine.

I've been using the new Starbucks at I-35 and Valley Mills as an evening work spot more often these days and when I arrived there Sunday night, I noticed a lot of commotion coming from Bubba's 33 next door. So much, actually, that I wondered if they had opened without me noticing.

However, they were clearly making sure their TV's worked by watching Game 2 of the NBA Finals.

The baristas next door informed me that the Bubba's 33 folks have been coming over for coffee pretty frequently and word on the street is they'll be opening June 16.

Mike Copeland of the Waco Tribune-Herald reported in his Sunday column that In-N-Out will officially be coming to town and opening at 5th Street and I-35. It's going to go in that space being cleared across the street from Torchy's.

We'll have more on this story as In-N-Out takes shape.