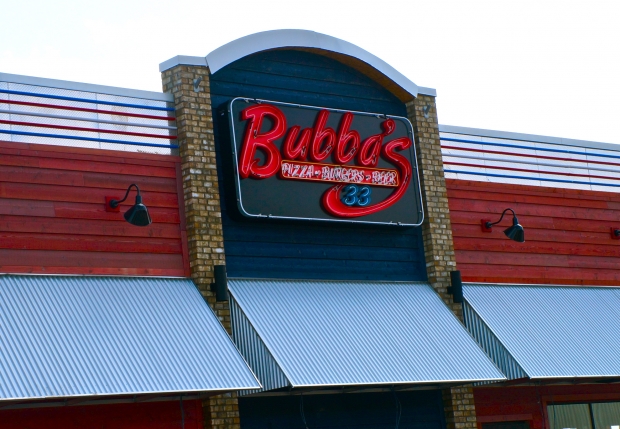 For weeks people have been asking me what's going in next to the new Starbucks and Potbelly at Valley Mills and I-35.

I wasn't sure because I'm still trying to figure out where the Zoe's Kitchen that's supposed to be going into that new Gander Mtn shopping center will be. But it turns out that red building next to Potbelly and Starbucks is Bubba's 33.

A friend gave me a heads up about it over the holiday weekend and when I went to check it out on Tuesday morning, the sign jogged my memory. I believe I mentioned this a while back, but it's a bu ostedrger and pizza bar.

In case you were wondering about the 33 in Bubba's 33, it's not a tribute to Larry Bird. It's a claim that they serve 33-degree beer, i.e. as cold as it can be without freezing.

I'm actually kind of excited about this place opening. It will replace Twin Peaks as a place to have a beer and watch a ball game and do so with a significant step up in family-friendliness.

I didn't find anyone to ask about how soon they'll be open. But I saw that they were pretty far along in outfitting the space, so I'd guess well before Independence Day. We'll keep you posted with details as we find them out.

One more bite: Upon checking on the Trib's website, I just learned that Bubba's 33 is looking at a mid-June opening and is hiring and Coach's downtown is planning to open Friday. Look for a Coach's blog later this week.