Newk's tees it up 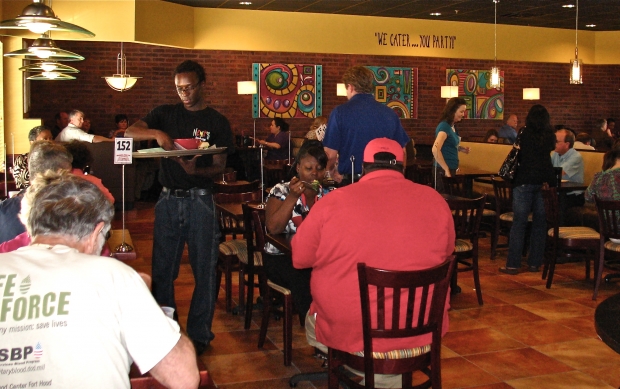 Never doubt the power of sarcasm.

Or perhaps more accurately, for once my snarkiness paid off.

In a previous blog about the opening of a new cafe called Newk's, I surmised that the staff of Newk's could play the staff of Panera Bread in a football game to take place in the parking lot between the two restaurants with area sandwich supremacy at stake. To which Keith Schroeder, general manager for Waco's Newk's restaurant, replied that he had complete confidence in his crew to dominate such a contest. He shot my sarcasm right back at me and then invited Cory and me out to the cafe for a sneak peek on Friday.

Of course, we accepted. And I was definitely impressed with the cafe and the dish I ordered. I ate the black and bleu salad, an interesting combination of mixed greens, sliced sirloin steak and bleu cheese dressing. Newk's features a unique condiment Roundtable, which helped me round out my salad with some croutons and banana peppers.

Cory ordered a shrimp po'boy, which I can only assume was tasty. It looked good, but he didn't let me try it, so I'll have to go back. Schroeder also sent us a slice of red velvet cake, I guess because he wants me to get fatter. I dutifully ate it, meaning I devoured every last icing-covered bite.

Newk's opened its doors to everyone on Monday, so I stopped in late in the lunch hour to see what kind of buzz they generated. It seemed like Newk's was having a solid opening day. Patrons were still lined up at the register as late as 12:45 and the cafe was mostly full, though it was still possible to find a table. My guess is that Newk's is going to enjoy steady traffic, especially as word spreads that its not just another sandwich shop.

One more bite: Newk's is the next endeavor of the people who originally started McAlister's. When they sold McAlister's, they signed a 10-year no-compete deal, then 10 years later cranked up Newk's.