In (further) praise of cheeseburgers 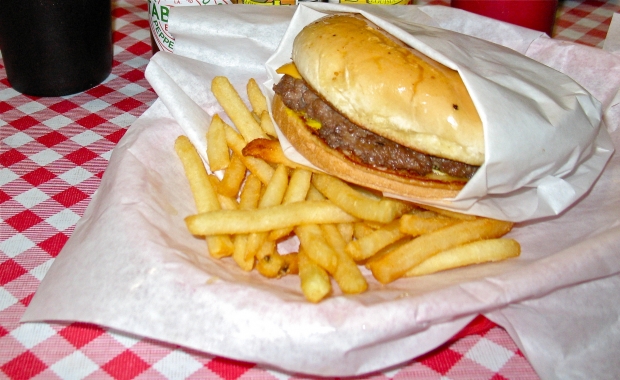 Once upon a time, my dad took me for a cheeseburgers, fries and a chocolate shake at Bill & Bob's. In my memory, we went to an old location of Bill & Bob's before it moved into its current location at 3600 N. 19th Street. I think it used to be near Lion's Park, but that was probably close to 30 years ago, so it really could have been anywhere. If anyone out there in WacoFork land can set me straight on this point, then please do. Just email me.

Since then, I've been back to Bill & Bob's once or twice, particularly when I lived in an apartment off of Lake Shore Drive. It's one of Waco's old reliable burger joints, right along with Dubl-R, Captain Billy Whizzbang's, Kitok's, Health Camp, etc.

In the years that have passed since my dad took the toddler version of me to Bill & Bob's, I've eaten a few cheeseburgers. I submit my expansive belly as circumstantial evidence.

I've even written at length about the glory of the cheeseburger in a manuscript I'm writing about my adventures in Scotland during 2010. That is to say, I'm an internationally known lover of cheeseburgers. It ain't bragging if it's true.

Among the questions my friends asked after I returned from my season in St Andrews, this one was the most common.

This is not a comprehensive answer, of course. I certainly didn't solely ingest cheeseburgers for breakfast, lunch and dinner for more than 100 days. That would be ridiculous. I also ate bacon sandwiches.

But it's an understandable inquiry as Scotland, along with England and Ireland, have a sort of ambiguous food legacy. British Isles food isn't potentially decadent like Italian food or Mexican food or even, I suppose, French food. It's not exotic like African or Indian food. It's not even particularly unique like German or Chinese food. It seems the easiest way to describe Scottish — or English or Irish — food is to classify it at pub food. This means fish and chips or steak and ale pie. … So I say cheeseburgers as I don't really ever crave fish and chips and hardly ever ate it. I never ate any kind of meat pie, though I'm not really sure why. It's possible that I have some sort of subconscious aversion to meat pies which might possibly stem from a bad experience involving chicken-pot-pie as a child. But I can't say for certain.

Oh yeah, and then there's haggis.

According to the Epicurious.com food dictionary, haggis is "made by stuffing a sheep's (or other animal's) stomach lining with a minced mixture of the animal's organs (heart, liver, lungs, and so on), onion, suet (the solid white fat found around the kidneys and loin), oatmeal and seasonings, then simmering the sausage in water for about 4 hours." This sounds kind of unsettling, so much so that I didn't even consider ordering haggis for the first 50 or so days that I spent in Scotland, even though everyone always asked me if I was going to eat haggis. I didn't intend to eat it.

Greg Colosi, obviously, finally prompted me to eat haggis for the first time. We were having dinner at The Dunvegan and, of course, he went right for the haggis as an appetizer. This allowed me to ease into the dish because this version of haggis was served as a round patty, about the size of a standard hamburger patty, with mashed potatoes (called tatties) and some sort of orange sauce on top. It was tasty. I never ordered it again, but that’s simply because it never made its way into my usual rotation. In other words, I wasn’t opposed to it.

The second time I ordered haggis turned out to require a larger dose of bravery, though I didn't know this until the dish was served. My parents and I ate at the McInnes bed and breakfast where we stayed during The Open. Proprietor Susan McInnes sent an email with menu choices a week or so before our stay there. One of the selections was haggis, so since I had tried haggis and thought this would be an opportunity to show off in front of my parents, I ordered it. And for the record it was pretty delicious. On this occasion, however, the presentation forced me out of my culinary comfort zone as the haggis was served in the stomach, which was sliced open with the corners peeled back and pinned in place.

And the potential for that kind of surprise probably explains why I kept my food exploring to sampling cheeseburgers around town.

The Dunvegan cheeseburger tastes much better than it looks. I wrote this on a blog I was writing while in Scotland. Sheena read it and called me on it.

"What do you mean our cheeseburger is ugly?" she asked.

That's not exactly what I wrote. But it is sort of ugly. Anyway it's not the kind of burger that would be photographed and used to sell burgers at Burger King. It's not the kind of burger in the which the patty peaks out from the bun, with tomatoes and onions and lettuce and pickles and cheese resting artfully on top. On The Dunvegan cheeseburger, the cheese pretty much envelopes the patty and spills over the side of the bun. This is not a bad thing, because the excess cheese allows for cutting it off and repurposing it to turn the fries into cheese fries. And because the tomatoes and such are left to the side, while the melted cheese takes over the bun and patty, minor surgery is required to apply mayo and mustard, in theory, and tomatoes and whatever. I realize I'm not painting the picture of a deliciously self-suffience cheeseburger, but its worth the wait. For one thing, Jack, being a good Texan even if he is an A&M Aggie, insists on a high standard of ground beef for the burger, and really any beef served within the confines of The Dunvegan pub and hotel. Jack couldn't in good conscious serve soy-infested beef, especially on July 4th and every five years during The Open when he breaks out the grill and cooks the burgers himself on The Dunvegan's front porch. So this is why looks deceive in the case of this cheeseburger. Simply put, it's the best cheeseburger this cheeseburger enthusiast has encountered in the United Kingdom.

There you have it. For those interested, the complete version of "In The Burn" by Chad Conine will be available in some format in the near future. It is available now for the right price. Just email me.