Going back in time at Health Camp 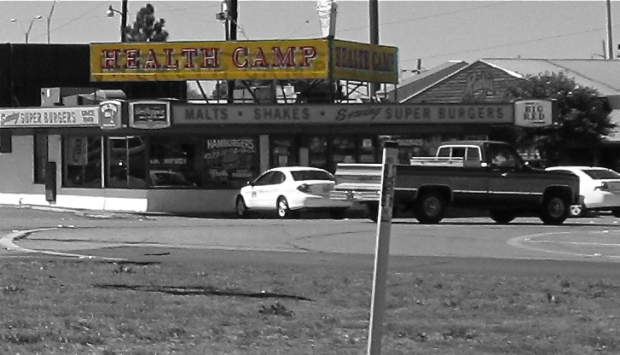 When I'm eating a hamburger at Health Camp, I feel a little bit like it's 1995.

I feel like I'm a junior or senior in high school again and I'm meeting one of my Baylor friends for a burger. I feel like we're about to go over to some dingy college apartment and watch a Baylor football game.

That's Health Camp's appeal. As the Waco restaurant scene changes from year to year, Health Camp is a place holder. It reminds us of who we were.

Next door, the Elite Circle Grille has reinvented itself in recent years. A few steps to the north, Rudy's has landed and made its mark in the Central Texas barbecue genre. Not far away, on La Salle Avenue, taco trucks have redefined the way Baylor students think about dining out.

With the recent closings of Zeb's, El Siete Mares and The Green Room and the upcoming openings of JJ's and Newk's — not to mention the nation-wide ripple effect created by Fat Ho Burgers — I've heard more than the usual talk about change on the Waco restaurant landscape.

Perhaps the most compelling change is neither a restaurant opening or closing but rather a reinventing of sorts.

Vitek's was, is and perhaps always will be famous for the Gut Pak. Until a couple of years ago, a Vitek's experience went something like this: You stand in line in the small grocery store, you tell Bill Vitek you would like a Gut Pak and what kind of sausage and bread you would like with it, Bill makes small talk while you wait just a few seconds, you pay for your Gut Pak and then you decide whether to eat it at the small picnic table outside or select an alternate locale for your dining.

I stopped by Vitek's earlier this week and had a nice chat will Bill, who was the third-generation owner of Vitek's. He has passed the business on to his daughter, Julie Vitek Keith who is the fourth generation owner. But Bill was kind enough to show me around the brand new dining room, bar and beer garden.

Traditionalists shouldn't worry, though. The Gut Pak remains intact as the featured obsession of both the Vitek family and Vitek's loyal customers.

So things change, but they stay the same.

As stated, Health Camp cruises along year after year making burgers, fries, tots and tasty milkshakes. When I ate there this week, I took a little imaginary field trip back to 1995. OK, so the jukebox is gone and the trash cans no longer say, "Thank you" when you toss your burger basket and used napkins. But they still have that special kind of ice. I don't really know how to describe it. It's kind of shaved ice I guess. Anyway, it makes Dr Pepper taste even more delicious.

And there's a Baylor football team photo, circa 1980, hanging on the wall. If the Bears can relive their glory days while enjoying a burger at Health Camp, then so can the rest of us.