Win an iPad 2 in the WacoFork.com 4x200 Sweepstakes 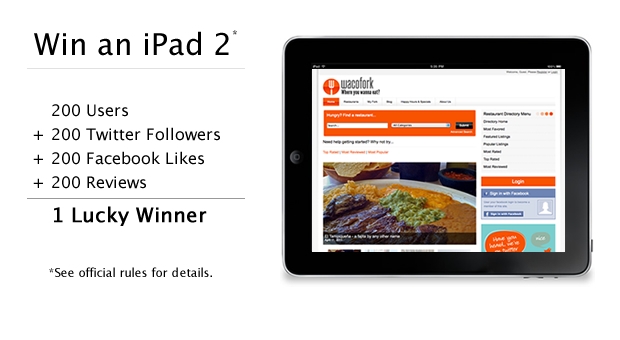 We're giving away an iPad2.

How's that for a quick, punchy lead? Do I have your attention? Well, then I succeeded. Now for the backstory.

We've been so pleased by the response to WacoFork in the site's first few days that we wanted to say thank you, so we're announcing our big 4x200 iPad2 giveaway.

When we reach four milestones — 200 users, 200 approved restaurant reviews, 200 Twitter followers and 200 "likes" on Facebook — we'll put all those entries into the hopper and pick one out. (We're trying to reach NBA commissioner David Stern to see if he would like to do the drawing out of the hopper. It's probably not going to work out).

Do I need to continue?

Tell you what, here's the official rules.

Keep in mind, there's no limit to the number of reviews you can write. (We will ask that the reviews be sincere and polite.)

So that's it, right there for you. Come and get it.