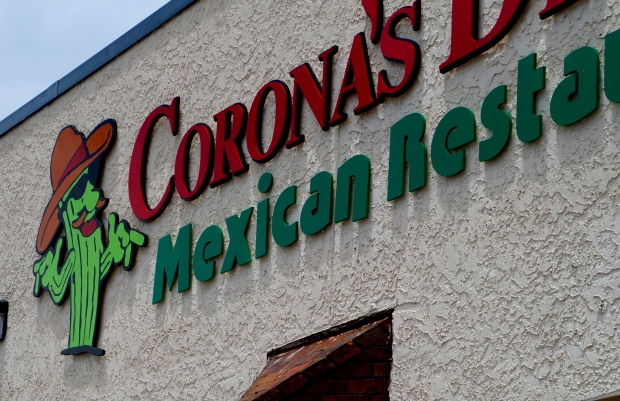 I noticed a new restaurant in that anchor space of the Valley Mills shopping center just on the lake side of the Bosque intersection.

The new place is called Corona's De Oro and they've been open about three months. I didn't dine there today. I'm interested in stopping in for lunch just because. But it's also the fourth Mexican food restaurant within the distance that I can hit a golf ball in that area (and I can't hit a golf ball all that far). Instead, I thought it would be more interesting to offer a brief history of that location.

BTW, this is going to be pretty general as far as the time frames, add a mental circa to everything. If you have info on precise dates, don't hesitate to comment and update me.

1. People's (1983-1988) — I only vaguely remember this place and if you remember it, not only can you call yourself a longtime Wacoan, but you also might not be young. I just remembered it had cool decor that might have involved an abundance of caricatures. I think it was sort of a precursor to Cricket's as far as atmosphere and cuisine. And it must have ultimately lost the battle with nearby Steak & Ale and J.T. McCords.

2. Pancho's (1988-2001) — This is the place where you would raise a flag on your table to signal to the server that you needed more of something. It was buffet-style Mexican food on the cheap, so it was probably not foodie fare. But I believe they offered free sopapillas, which my friend Jeremy Webb dubbed "air biscuits."

3. Shogun (2002-2014) — This was hibachi on the chill. It was kind of like dining on decent Japanese food, cooked right in front of you while you were hanging out in your cousin's basement. It went away with the great hibachi evacuation of recent years.

4. Corona's De Oro (2015-???) — We'll try and give more details on the new place. One thing I noticed during my stop in today was that they've brought free sopapillas back to the neighborhood.